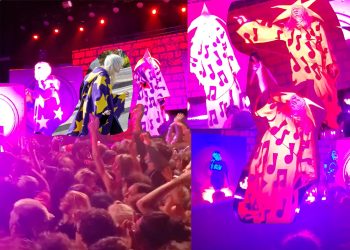 — We’re standing, drenched in sweat, in an alley in downtown Boston, recounting our foreign currency. 15 minutes ago, the only part of my friends I could even see over the sardine-can-like mob of bodies was Audrey’s neon orange hard hat, pushing towards the barrier. Now, outside and with air to breath, we don’t want the energy to fade away. We’ve just seen 100 gecs, and Millan wants to buy Dylan Brady’s hat. The hat in question, a yellow wizard hat with a seven-pointed brim that suggests some form of sun magic, has been all over the publicity for the current tour, meaning a high price is probably in order, but the dregs of our wallets will have to do. What comes out is the stuff you keep around for the novelty factor, not for any real monetary value. I can’t help, since the only things in my pockets are a vaccine card and a US passport, but we’ve assembled a small UN to present to the band. “30 billion Zimbabwean dollars, 89 Turkish lira, a Harvard student ID, a cloak, and a Washington State drivers’ license!” Millan declares. “And the hard hat!” Audrey reminds him. “And the hard hat.”

100 gecs, the collaborative project of Dylan Brady and Laura Les, are a band at a crossroads, a sort of interpolation of nostalgia for 2000s emo, 90s hardcore rave, and 2010s soundcloud rap all wrapped up in some demented, distorted flavor of bubblegum pop. Perhaps unsurprisingly given that string of influences, their shows are not known for being serene. The opener for this stop on the tour is Alice Gas, an up-and-coming producer known for her chirpy, fist-pumping modernization of old school hardcore. The amateur rave historian I am, I insisted we arrive early so I could drink in every second of her set. The leadup to the start was a people-watcher’s dream; an eclectic band like 100 gecs attracts an eclectic crowd. There’s us: myself, in a Hawaiian shirt, bright orange beanie, and tee for Laura and Alice’s collective-slash-record-label 909 Worldwide. Millan, in a highlighter green British Petroleum boilersuit inexplicably found at a thrift store. Audrey, in her hard hat, green houndstooth pants, and tee shirt covered in eyes. We make a compelling trio, but we barely scratch the surface of the fashion out on the floor. There are corsets, overalls, a goldmine of piercings, rave kids, people who looked like they stepped out of a Hot Topic in 2009. There’s one out-of-place looking middle-aged man in head-to-toe Atlanta Braves gear. Next to him is a zoomer with a huge, fuzzy top hat. It’s a giant SpongeBob. His jacket is a branded SpongeBob sweater. His shoes are black Timberland x SpongeBob collabs, deep out of the vault. He is wearing only SpongeBob. When Alice Gas steps on stage and cues up the first track on her mixer, the crowd collapses in on itself. Any fashion statements are rendered null as every person tries at once to push to the front, turning the crowd of individuals into one, sweaty, pulsating mass. To steal a phrase from Boston house legend Bob Diesel, it was mobbed, it was butts to nuts. The music, rarely dipping below 180 beats per minute, matches the aggression of the horde, feeding back into each other and upping the frenzy. It’s transcendent in a terrified way. I am not punching the air along with the music. There is no air to punch. In this moment, the best I can do is jump along and try my best to stay on my feet as I move with the crowd.

When the gecs finally take the stage a half hour after Alice’s set wraps up, the crowd has barely moved an inch. The lull of nothing but the PA idle music has not dimmed the crowd’s enthusiasm in the slightest. Even tying my shoes was a project, clearing just enough room to bend over and fiddle with my now-soaked shoelaces. Someone two rows in front of me lights a joint before almost getting ejected by security. “How dumb do you have to be to light a j in the Royale?” I can make out on the phone of the person next to me. That’s all forgotten when Dylan and Laura take the stage, donning the wizard robes and custom hat (the hat!) that have made up much of the promo imagery for this tour. They’re ready to go. The crowd pushes forward again, chanting, “gec! gec! gec! gec!” This time I’m ready for it. When they take off the robes and launch in to the breakout EDM-trap-twinged faux-ska anthem “Stupid Horse” for their second song, I shout along with them. The whole crowd does, with whatever air they’re able to squeeze into their lungs. When they pull out acoustic guitars to essentially cover their own song “gecgecgec,” the crowd stays fully bought in. Joking shouts of “PLAY WONDERWALL!” melt in to belting along with the lyrics. When a sound tech runs on to stage between songs to set down a broken xylophone at the front of the stage, the mob roars. We all know what’s coming, we’ve all seen it cross our feed on twitter or tiktok. The gecs crouch down to flog the xylophone, until their mallets break and the heads fly across the stage. There’s no other sound, no lyrics, no hyperproduced bass. The crowd still moshes along happily.

Out back behind the venue Dylan Brady does not sell us his wizard hat. He only has one, he says, dropping into his tour bus to grab a bottle of champagne and a stack of records, a balaclava covering up his distinctive arms-length bleach blond hair. We stick around to give it one more try. When both gecs eventually come out the backstage door, Audrey enters full salesman mode. “We’ll make you a new one out of duct tape and bring it back here in two hours!” Laura Les stops and turns around. She’s interested. Unfortunately, the deal ultimately fails. The bus will most likely be gone in two hours, and 30 billion Zimbabwean dollars is only worth around US$24. Still, Laura signs the $10 billion banknote. And the Harvard student ID. And the Washington state driver’s license. 100 gecs has been the flashpoint of a frankly annoying amount of discourse on millennial and gen-z irony, but this interaction is all sincere. Just like their music, the show (and the signing) is absurdity made delightful. Even if it is “just noise,” as their detractors are wont to claim, it’s beloved noise. It’s noise that can turn a crowd of hundreds into a moshing, screaming primordial soup.