WALTHAM, Mass.– The Brandeis Judges(3-0) finished off their weekend tournament this Saturday afternoon in a defensive showdown against the Husson Eagles(2-1). Caitlin Gresco led the team with 10 points and 9 rebounds, while Emma Reavis and Kerry Tanke also scored 10 points each. The Judges held a strong lead for most of the game, leading by as much as 15 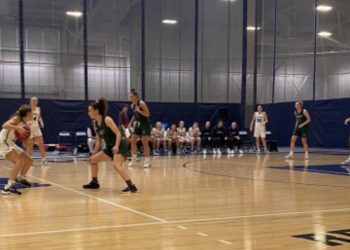 points. The Judges used an early 8-0 lead to take the lead early and never let go, holding Husson to just 27.8% shooting from the field. For the Eagles, Bailey Donovan dominated with 10 points and 17 rebounds, while Sydney Allen and Vanessa Duarte each scored 17 points. The Judges also excelled at drawing fouls, going 17/23 from the free-throw line and getting both Allen and Duarte in foul trouble.