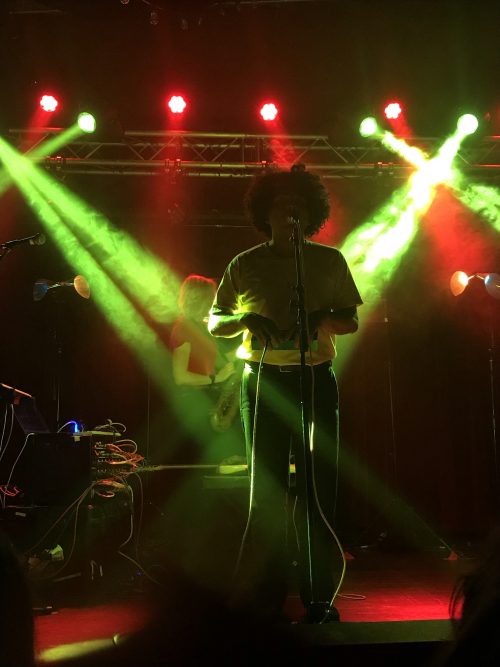 Helado Negro welcomed the summer solstice and transported us into a heartfelt wonderland with his glittery, soft-pop tunes.

LA-based August Eve opened up the show. This was one of the few times I hadn’t listened to the opener before going to a concert, so I was pleasantly surprised. Her songs were mellow, reminiscent of 90s pop ballads with glittery synths and an R&B touch with her smooth, powerful voice. A fitting artist to warm up the crowd for Helado Negro.

Clad in coordinating outfits consisting of different primary color tees tucked into dark slacks, Helado Negro began the set with “Please Won’t Please.” Roberto Carlos Lange is Ecuadorian and a native South Floridian, and many of his songs are bilingual, in English and Spanish. “Pais Nublado” is one of my favorites; undulating synths harmonized with Lange’s crooning voice and soft guitar strumming. They continued to play through the entirety of This is How You Smile, Lange’s sixth album, which was released this March. That album is one of my favorites this year and hearing it live was incredible.

Lange was supported by his two bandmates, one of whom switched between the keys, a violin, and a saxophone, to create these beautiful soundscapes. The dreamy ambiance was further enhanced by the continuous fog released on stage, a mist that accentuated the projection of the colorful lights. Helado Negro invited the crowd to sing along to the chorus of “Running.” “It’s simple, it’s running, just like that,” he smiled.

Lange made an effort to make prolonged eye contact with each person in the crowd. It was so heartwarming to see the smiles on each person’s face as this happened. When he pointed and looked at me during a song, I felt so validated as a fan. This kind of recognition was so sincere. It certainly doesn’t happen at every show.

Helado Negro ended the night by playing several older songs, including the hits “Young, Latin, and Proud,” “It’s My Brown Skin,” and “Come Be Me.” These songs are much more upbeat compared to the dreamy peacefulness of This is How You Smile, so the crowd’s side-to-side swaying turned into more energized dancing. After much excited coaxing from the crowd, they returned to play two final tracks.

Lange projected nothing but genuine love and wholesomeness for the duration of the night. If heaven is a place, I’d like it to be at a Helado Negro show.

Anna Bartusis is the live music director at WBRS and studies Anthropology at Brandeis University. She is from Aberdeen, South Dakota. Tune into her show Sweet Thing on Wednesdays at 8pm EST (during the school year!)