By Joshua Hertz, Sports Director — The second day of the Tampa music festival was just as lively as the first, with doors opening at 1pm. This day once again featured appearances from former MLB pros including a music set by former pitcher Jake Peavy at Right Field at 2:15 along with the Left Field jams that had started the day before. My family opted to check out some of the baseball activities early in the day, which included a diving grab photospot, batting cages, and a fast pitch station. Although I may be the sports director here at WBRS, it was clear by my pitching and hitting that the pros are probably not gonna be calling me any time soon. 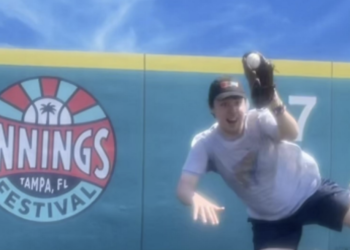 In this second day of the festival, the artists were generally more leaning towards folk, country, or generally softer rock sounds, with a mix of genres including reggae and world music. This day was headlined by The Lumineers, and as a result drew in many fans who opted to skip the first day as well as many returnees. One notable figure my family spotted throughout the day was a man clad in a wizard outfit who blew bubbles and danced erratically, who by the end of the day had a small following.

The first act of the day was psychedelic rock act Liz Cooper. Cooper opened with a unique sound blending folk, alternative rock with grunge elements. The band kept up the energy despite the scorching Florida heat, and served as a great opener for what was to come. 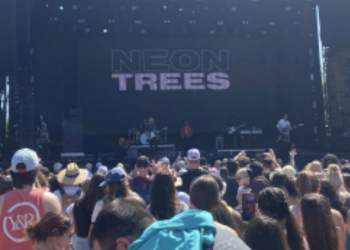 After a country music set by Jake Peavy at Right Field, the energy returned to Home Plate with pop rock act Neon Trees. The rockers from Utah played a phenomenal set, mixing newer songs with hits such as “Animal” and even doing a cover of the Human League’s “Don’t You Want Me” as a duet between the lead singer and the drummer. The group hit their stride early and closed it out on a strong note with their breakout hit “Everybody Talks”.

Back at Right Field stage, reggae singer Skip Marley took the stage. The Jamaican artist excited the crowd with his infectious energy. Marley played many of his original songs as well as covers of his late grandfather Bob Marley, such as “Three Little Birds” and “Could You Be Loved”.

Next up was pop rock group O.A.R. at Home Plate stage. The group bended traditional instrumentation by mixing in keyboards and horns. The band energized fans with hit songs “Shattered” and “Heaven” before closing out with ballad “Peace”

Crowds started to really form over at Right Field stage to see the alt rock group the Goo Goo Dolls. The band opened up with “Dizzy”, and played hit after hit, highlighted by songs such as “Slide”, “Black Balloon” and “Name”. The band closed out their set with iconic songs “Broadway” and their signature song, “Iris”.

Band #6– Nathaniel Rateliff and the Night Sweats, 7:00-8:15 @Home Plate Following an awesome set by the Goo Goo Dolls, the crowd continued to be amazed by Nathaniel Rateliff and the Night Sweats. Rateliff’s blend of blues, folk and southern rock appealed well to the Tampa crowd, and the group all wore cowboy hats to combat the Florida sun. The band especially brought the energy during their hit song “S.O.B.”, a crowd favorite.

Next up was a band that combined an eclectic mix of genres, Khruangbin. The world music inspired act used dazzling screens and notably did a cool mashup covering popular songs such as “Wicked Game” and “Bennie and the Jets”. 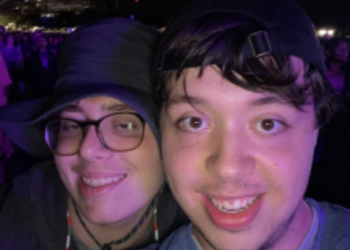 Closing out the festival was the biggest name in modern folk rock, the Lumineers. The fedora clad group dazzled in front of bright lights and large electronic video screens, opening with their new song “Brightside” and hit “Cleopatra”. The crowd reached its peak during their set, and the performance of their biggest hit, “Ho Hey”, was absolutely electric. During the show, my younger brother and avid WBRS listener Alexander Hertz(pictured) was told by a drunk concertgoer he was “wonderful”, which was quite bizarre. The Lumineers, meanwhile, continued to mix new songs with hits, putting together a strong finish to an amazing festival.