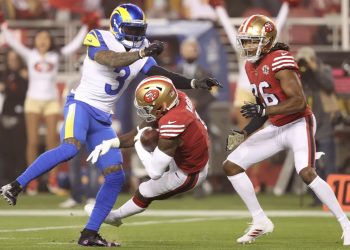 struggles continued after losing big last week, falling in San Francisco to the 49ers(4-5) 31-10, who have now won five straight meetings against the Rams and passed the Seattle Seahawks to move to third in the NFC West. The Rams had strong drives early but failed to capitalize on drives and early turnovers kept the ball out of their possession for much of the first half. San Francisco entrusted the team with veteran quarterback Jimmy Garoppolo over rookie Trey Lance, and Jimmy G. proved he was the right choice. The 49ers were excellent on offense, with Garoppolo passing for 182 yards and two touchdowns and star wide receiver Deebo Samuel serving as a dual rushing and receiving threat with 36 yards and a touchdown on the ground and as a receiver was responsible for 97 yards and a touchdown. Tight end George Kittle had a solid bounce back game for the 49ers after a costly fumble last week, hauling in 5 receptions for 50 yards and a touchdown. The 49ers used a strong run game to their advantage, giving them more time of possession, with Eli Mitchell rushing for 91 yards. Rams quarterback Matthew Stafford was good but not effective enough to lead the endzone consistently, passing for 243 yards, a touchdown and 2 interceptions. The Rams went three and out for their first three drives out of the second half, and Stafford’s early interceptions cost the Rams too much ground to make up early on. The Rams defense, heralded as a strong point and led by reigning Defensive Player of the Year Aaron Donald failed to stop the 49ers offense, not forcing a punt until the second half.

The game was exciting early, with Stafford throwing an interception to 49ers safety Jimmy Ward, who returned from injury this week. Garoppolo and Co. made a methodical drive down the field against a tough Rams defense to score an 8-yard touchdown pass from Garoppolo to tight end George Kittle late in the first. On the next drive for the Rams, another Stafford pass was deflected and intercepted by Jimmy Ward, who ran it back for another 49ers touchdown to give them a 14-0 lead to end the first quarter.

Early in the second quarter, the Rams quickly drove down the field behind a great passing attack by Stafford, leading to a 10-yard touchdown pass by Stafford to tight end Tyler Higbee. The 49ers followed with another lengthy drive capped off with an 8-yard touchdown run by wide receiver Deebo Samuel. The Rams responded with another quick drive to get to the redzone, but an unsuccessful 4th down conversion on a fake field goal left the score at 21-7 going into the half.

After lackluster offense for both teams for most of the third quarter, the 49ers added to their lead with a 50-yard Robbie Gould field goal with 4:38 in the quarter. Early in the fourth, Garoppolo padded the lead with a 40-yard touchdown pass to Deebo Samuel to extend the lead to 31-7. With late in the fourth quarter Stafford and Co. drove down to the redzone, but failed to convert on fourth and goal for their second turnover on downs in prime scoring position. The Rams drove back down the field and settled for a 37-yard field goal to bring the score to 31-10 with 3:48 remaining. The Rams were unsuccessful on the ensuing onside kick, allowing for San Francisco to burn through the remainder of the fourth quarter to end the game.

gold and blue for the first time. The 49ers also had a season debut for running back Jeff Wilson Jr., who missed the first eight games with a knee injury.

Stafford had similar woes in his last game against the Tennessee Titans, who also picked him off twice and took one back for six points in what was a blowout loss for Los Angeles Up Next

The Rams(7-3) will get a bye week before heading to Green Bay to face the Packers. The 49ers(4-5) will head to Jacksonville to face the Jaguars(2-7) on Sunday with a good chance to .500 on the year.