Reaves has career night, but Judges struggle, collapse in 72-55 home loss to Rochester

By Joshua Hertz, Sports Director — The Brandeis Women’s Basketball team continued to struggle in UAA play this season, losing their eighth of their last nine and splitting the season series with the rival Rochester Yellowjackets. The Judges saw a career day from junior Emma Reavis, and were able to stick with the visiting Yellowjackets before a slow start out of halftime dug Brandeis into a double digit deficit that they were unable to dent. The Judges continue to struggle this season after injuries to senior frontcourt players Shannon Smally and Courtney Thrun and have been prone to late game collapses in the very competitive UAA scene. 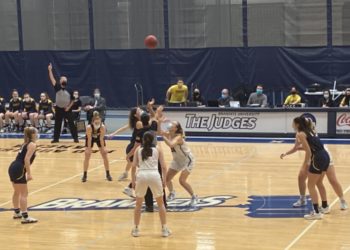 Despite the disappointing loss, Judges head coach Carol Simon remained confident in her team’s ability and praised the energy and hustle they showed. Simon said of her team that “even in our games where we have lost, we’ve been very resilient and very competitive” and that they are “learning to play the full 40 minutes”. While the team struggled to play a full 40 minutes of top basketball against the Yellowjackets, Simon noted that the team “had good shots, but just didn’t make shots”. The Judges, who entered the game shooting a measly 36% percent on the season, continued their cold shooting with a 30% field goal percentage and an abysmal 7 point third quarter in which they shot 15% from the field.

The game was not all bad for the Judges, who saw a 17 point performance from Reavis, including 10 in the first quarter. On the poor second half performance, Reavis noted that “It’s all about heart… we are capable of some beautiful basketball to be played out there, but when one

person falls you are only as strong as your weakest link and honestly all of us weren’t there”. For the Judges, only Reavis, Camila Casanueva and Kaitlyn Gresco were able to score more than 4 points, and the team had plenty of miscues on offense, including 12 turnovers. Reavis

lamented that “we floundered after a couple mistakes, … we need to be more resilient”. Rochester took full advantage of their size and depth in their victory over the Judges. Yellowjackets center Julianna Okoniewski had almost no resistance in the paint from the Judges undersized frontcourt, grabbing 14 rebounds along with 17 points to notch a double-double. The Yellowjackets took advantage of the Judges turnovers as well, scoring 12 points off of them, and outscored Brandeis in the paint 34-26. The biggest factor to the lopsided victory was the third quarter performances by both teams. The Yellowjackets closed out the last seven and a half minutes on a 15-2 run, and outscored the Judges 20-7 in the quarter to give themselves a solid lead heading into the final frame.

Brandeis continued to struggle at three point baskets, not making a single attempt until the fourth quarter. The team was successful at drawing fouls, scoring 12 of 19 from the line, but could not consistently score baskets and ultimately lagged behind the more consistent offense of Rochester.

While not their best season, the Judges seem hopeful for the rest of the season. Coach Simon said it best when describing the Judges positive mentality: “We always say everyday, get 1% percent better, …we don’t look backwards… we know we can be good”

The Brandeis Judges(6-12, 1-8 UAA) will have a short break before they head back on the road Friday with a rematch against the Carnegie Mellon Tartans.

The Rochester Yellowjackets(13-7, 5-4 UAA) will have a few days before a road trip Friday to attempt a season sweep against the University of Chicago Maroons.