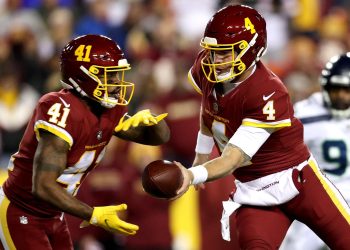 Heinicke led the Washington Football Team(5-6) to a 17-15 victory over the visiting Seattle Seahawks(3-8). Seahawks quarterback Russel Wilson had a 33rd birthday to forget, struggling most of the game and finished passing 20/31 with 247 yards and 2 touchdowns. For the Football Team, Heinicke had an average game, passing for 223 yards, a touchdown and an interception. The Football Team won thanks to a strong run game, led by Antonio Gibson’s 111 yards, while J.D. McKissic was a dual-threat with 30 yards and a touchdown on the ground and 26 yards and a touchdown as a receiver.

Washington struck first on their second drive of the game with a strong combination of Antonio Gibson’s rushing and Heinicke’s short passes to set up Joey Slye’s 23-yard field goal. The Seahawks quickly responded by reaching the redzone on a 55-yard pass from Wilson to receiver Tyler Lockett, setting up an easy 6-yard touchdown pass from Wilson to tight end Gerald Everett to end the first quarter 7-3. Late in the second, Seahawks safety Jamal Adams picked off a deflected Heinicke pass, but a fumble two plays later gave Washington back the ball. Washington proceeded to methodically drive down the field, leading to a 10 yard passing touchdown pass from Heinicke to running back J.D. McKissic, but a blocked extra point taken back to the opposite end zone by Seattle defensive end Rasheem Green for two points, resulting in a 9-9 game going into the half. Washington kicker Joey Slye, who is on his third team this season and currently filling in for the injured Dustin Hopkins, strained his hamstring while chasing Green on this extra point attempt.

The Washington Football Team opened up the half with a long drive capped off with a 10-yard J.D. McKissic rushing touchdown, followed by a two-point conversion on a rush by Antonio Gibson to break Washington’s league leading two-point conversion drought and give Washington the 17-9 lead. Strong defense by both teams kept the score locked at 17-9 for the remainder of the quarter. In the fourth quarter, the Football Team were able to put together another long drive midway through the quarter, burning clock before a touchdown pass was overturned on Fourth and Goal as an incompletion. This allowed Seattle to get the ball on the 3 yard line with less than two and a half minutes remaining. With a fast drive down the field, Wilson found wide receiver Freddie Swain for a 32-yard touchdown with 15 seconds remaining. On the two-point conversion attempt, Wilson threw an interception, allowing Washington to hold a 17-15 lead. Seattle recovered an onside kick but lined up incorrectly, a costly penalty forcing a rekick. On the second kick, Washington recovered the ball, sealing their victory.

Both Washington and Seattle have suffered from quarterback injuries. The Football Team lost 39-year old veteran Ryan Fitzpatrick in their opening game, and is expected to miss most of the season with a decent chance he won’t be back at all this season. Taylor Heinicke has been the starter for Washington this season after coming out of retirement last year to make a playoff start for the team. Meanwhile Seahawks quarterback Russell Wilson had a finger injury Week 5, not returning to the team until Week 10.

Washington entered the game with third string center Keith Ishmael starting, and briefly turned to the fourth string when Ishmael briefly dealt with an injury.